During first quarter reflections this past October, many students chose to reflect on their independent writing projects. These self-determined, goal-oriented projects were also a highlight of most parent teacher conferences. For me, independent writing projects are the genius hour of the English Language Arts classroom. The students learn so much when they have creative freedom and a scaffolding of support.

Just before winter break, the students shared excerpts of their independent writing projects with one another in a coffee-house style setting, and I had the pleasure of sitting down to read their final, full projects over break.

While writing during their hour of class time each week, I saw …
Post a Comment
Read more 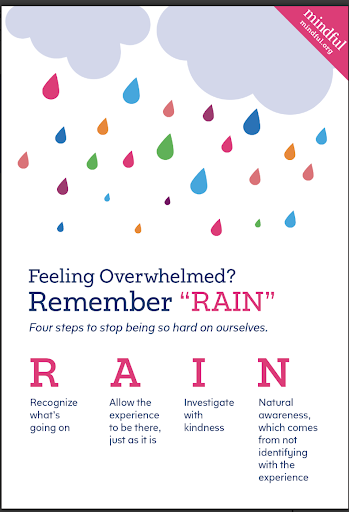 Someone slams a door. We hear the sound, and we react. We turn. We look. We might become angry. We might ask about what is happening. We may run. There is a stimulus, and in the matter of mili-seconds, our brain makes a decision, and we react.

Mindfulness tools give us a chance to pause between the stimulus and the response. That pause can be life altering. Really.

Drawing from social thinking training and mindfulness training, we have been using that pause as a moment for values-based reflection before action.

Option 1: RAIN - Recognize, Allow, Investigate, Non-identify (Read more about this at https://www.mindful.org/rain-a-mindfulness-practice-for-welcoming-your-emotions/)
-Walking through "RAIN" with a Scout from To Kill a Mockingbird might look like this:
Scout punches her cousin for calling her father an inappropriate and racist name Recognize: anger, frustration Allow: It is okay to be angry. She can sit with that an…
Post a Comment
Read more

By Ms. Plastrik - December 13, 2019
The students have been studying conflict resolution and peacebuilding largely using a curriculum developed by the United States Institute of Peace. That work has been supported by their study of current events and our work preparing for Model UN.

Several weeks ago, students completed negotiation preparation sheets, detailing the positions of the parties involved in international conflicts of interest to them. Using their research, new information, and a bit of dramatic flair, I developed a conflict resolution simulation.

We completed the simulation in each social studies class, so two summits took place.

In the end, we had two very different results, but both summits wer…
Post a Comment
Read more 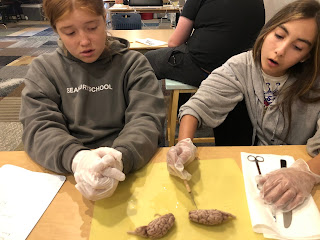 Neuroscience Why does the brain have grooves? Why does the cerebellum look like a tree? Why does our heart beat slow when we submerge our face in warm water and increase when we put our hand in ice water?
These are the types of questions middle school students in our Psychology/Neuroscience course are wrestling with. They get to use tools real scientists use to investigate the brain. They dig into the past and make connections with Renaissance Philosophers and Ancient Egyptian mummification practices.
Some students love memorizing facts and others love illustrating their understanding with their artistic minds. Students engage in hands-on science and then look for new and creative ways to apply their knowledge. Experiences like the ones pictured below challenge them and allow them to use their gifts.

In social studies, the students have been researching conflict zones as well as peace-building strategies.

This week, they participated in a negotiation simulation between a parent and a teenage child in Indian Kashmir trying to decide whether to move or stay.

During this activity, students had to assess and analyze their character's bio in order to determine his/her/their position (nonnegotiable) and interests (negotiable). They also had to think outside of the box to determine potential solutions and ways they could work together to build consensus and, eventually, compromise if needed.

Thank you, room parents, for helping make Halloween so special! Thank you, Seabury students, for doing such an amazing job cleaning up after Halloween.

The psychology experiment groups have moved into the creation stage of this project.

The students are now crafting public service announcements to share the results of or information about their psychological experiments.

Today, each group pitched its vision to the rest of the students.


The audience asked comprehension questions and completed feedback forms designed to lead each group to think more deeply about the choices they were making in the advertisement.

Then the groups had time to read and reflect on those feedback forms.

One of the really neat aspects of this project is that different students with different strengths have the opportunity to step into leadership roles. Those who planned and implemented the experiment are not necessarily the same as those who took the lead on coming up with a creative vision for the advertisement. Those who stepped forward to "pitch" and those who drew the pictures for the storyboards might not be the same as those who managed the l…
Post a Comment
Read more
More posts